HOMELESS: An After Christmas Story

A few who look like they're waiting for a drug deal to go down, only I knew it was a fake, because what is there to buy or sell, and even if they're carrying -- because you pretty much look the way you see yourself, so some people are armed -- they aren't dangerous. If they had ever been truly dangerous, they'd be inside watching the strippers, or whatever they did inside Club Styx. These guys think if they look bad enough, if they say enough rude things to passersby, maybe someday they'll get by the bouncer. Ditto with the ones who look like hookers.

They've got nothing to sell. But let's face it. Not everybody in hell is bright.

Homeless at Christmas: Stories from on and off the streets - BBC News

Then there are the crazies, shouting and preaching about Jesus and the end of the world, only it dawned on me pretty quickly that they aren't crazy -- I mean, after you die there's no schizophrenia because there's no brain to malfunction. They're preaching because they're trying to tip the balance the other way, to show how righteous they are, denouncing sin, calling out the name of Jesus -- or whoever, depending, but most of the shouters were, like, born again, only it apparently didn't take the way they thought.

I stood there watching them, and walked around watching them, and sat down and watched them, and no matter how hard I tried, I couldn't bring myself to care. It began to dawn on me just how long eternity was going to be, stuck on the streets of hell. I tried street after street, only nothing changed except the faces. The language didn't even change, because after you're dead all the languages become the same. They speak, and they think they're speaking Arabic or Tagalog, only what you hear is English, or at least you think it is. If you speak English.

Anyway, you can understand everybody, and that's the worst, because you can't even go to a place where you don't understand the words people are saying so you can tune them out. You're always tuned in and it's so boring. Daytime comes and goes, just like on earth, and gradually it began to dawn on me that this was earth. In fact, it was Washington DC, which is where I happened to buy the farm, hit by a car trying to cross Wisconsin in Georgetown on New Year's Eve , which meant that whether the world ended that night the way everybody said it might, it definitely ended for me.

I knew the streets.


I could walk down the mall. Only everybody I saw was dead. I thought for a while that the whole world must have died or something, but then you'd think there'd be more newly dead people like me, you know, the whole government thing, if the world ended surely some significant percentage of them would go to hell, and surely they couldn't all qualify to get into Studio , so where were they? No, the world hadn't ended, just my little oxygen-consuming, carbon-dioxide-expelling bag of blood and bone.

And now that I was looking for it, I began to see the signs that life was going on. Things changed position. Garbage cans were in one place and then they were in another. Cars were parked somewhere and then they weren't. But you never actually saw them move. Nothing moved. It was like when they were in motion, they disappeared. And it occurred to me that it was like long-exposure photography. You set the exposure time really long, the aperture very small, and the only things you get are the things that don't move.

Pedestrians, cars, anything that moves is gone. It's like in hell time passes so slowly that living people are invisible to us. I had it figured out! I looked at him, a little puzzled by why he was fat. I mean, surely when you die, you don't have to be fat anymore. Not true. It's just another fat guy in there. In fact, usually a fatter guy. And also it was kind of funny. They're thinking of themselves as righteous.

Ditto with the bad dudes and the tough girls. They're needy, all of them, and needy doesn't get you off the street. Needy is what gets you on the street. Whenever I start going one direction, I do something to send me back the other. I mean, you've been answering stuff I didn't say. I don't have to wait for you to speak. Because, you know, it's not like we actually have voices. We just sort of wish our thoughts to be heard, and then people close by can hear them.

Please help us tackle urgent problems of homelessness and destitution

But your thoughts are actually just as loud, so to speak. So yeah, I can hear stuff. But you, you can see things. I watched you. Crossing the street. You waited for the light.

The lights don't change. What you can do.

No pipe clenched between his teeth, but his stomach was rather like a bowlful of jelly. But you see, it doesn't make much difference. I've got this image in my face every Christmas -- no, every Halloween and two months after -- and it's all I can do to keep from wearing the red suit all year long. I used to be thin, when the Dutch were in charge of the image. Aren't you supposed to be Saint Nicholas? Any more than you are. This ain't heaven. 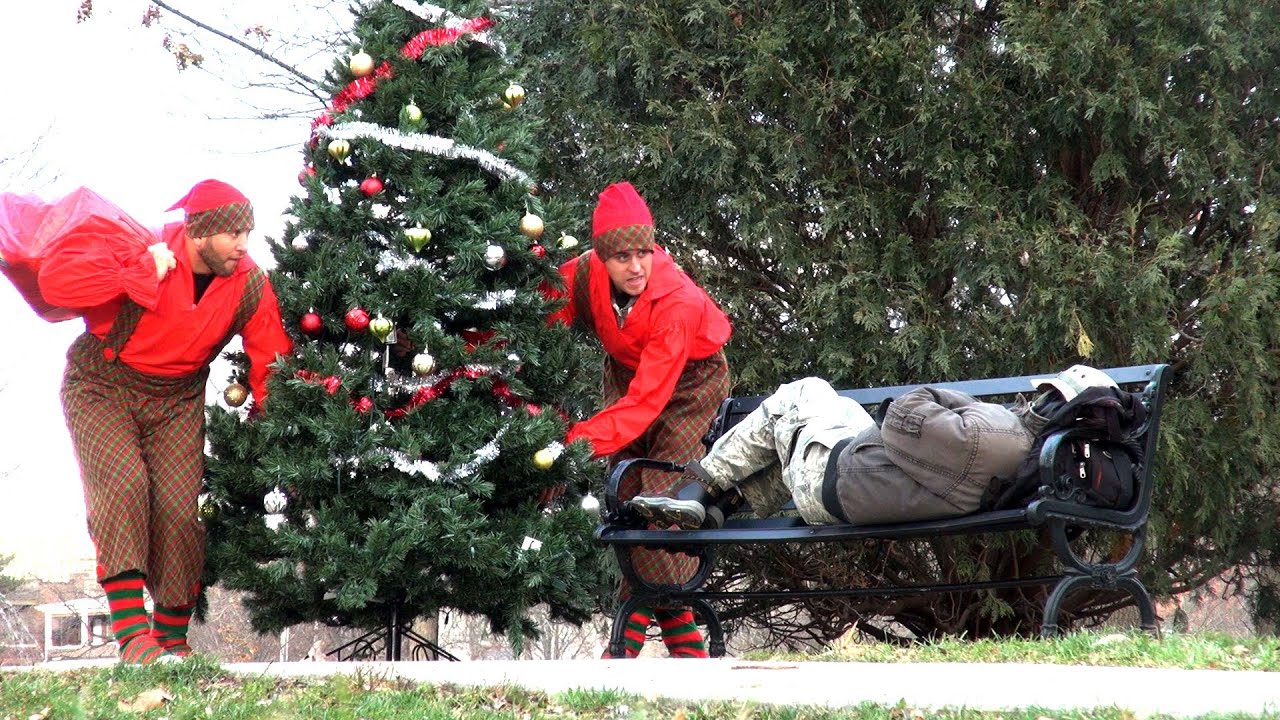 Or maybe we're volleying, like the shuttlecock in badminton, back and forth, almost one thing, almost another. That toymaking, that's just part of the myth. Hasn't anybody caught on that I'm dead? They don't issue us hammers and saws and set us to work making wooden toys. There's precious few of us can even see the living, and those that can move things in the material world, those are even more rare.

You aren't Santa Claus. You're Robin Hood. It's not like we can move anything very far. And nowadays it's a cash economy. Come to think of it, it was back when I was alive, too.

They used to draw pictures of me with bags of money, because that's what I did, my famous good deed, I paid a ransom in coin, saved some kids. Money's what we mostly use now, too. And because it's paper, it's even easier. Even my less talented elves can move it.

He was so serious. I laughed. Santa Claus, stealing toys, breaking them, hiding them, dealing in cash. You got your elves out picking pockets? He didn't look amused. In the material world. Not systematically. Been close to that, too? But not to stay.